I now believe that when Sir Mix-A-Lot claimed he ‘don’t want none unless you’ve got buns, hun’ he was clearly talking about the need to satisfy his craving for the soft, semi-sweet buns of dough filled with sweet or savoury fillings, served at ‘Kollache Cravings’. 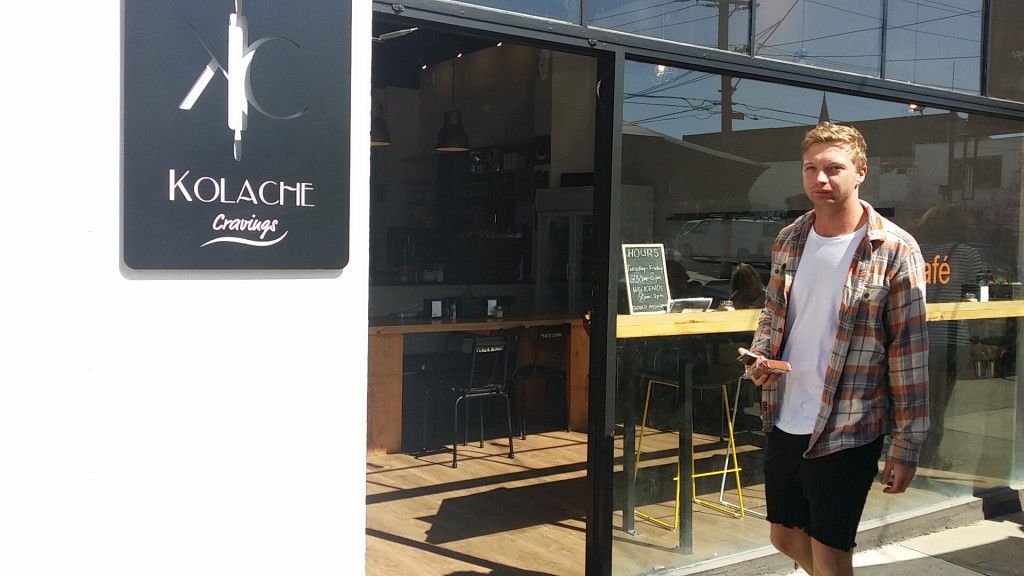 New micro bakery Kolache Cravings serves its star product and namesake, the Czech and Texan fusion baked treat. Originating from the Czech Republic, kollaches later rose to popularity in Texas once the traditional recipe was tweaked to begin introducing both sweet and savoury fillings as well as experimenting with the fillings by using modern flavours. 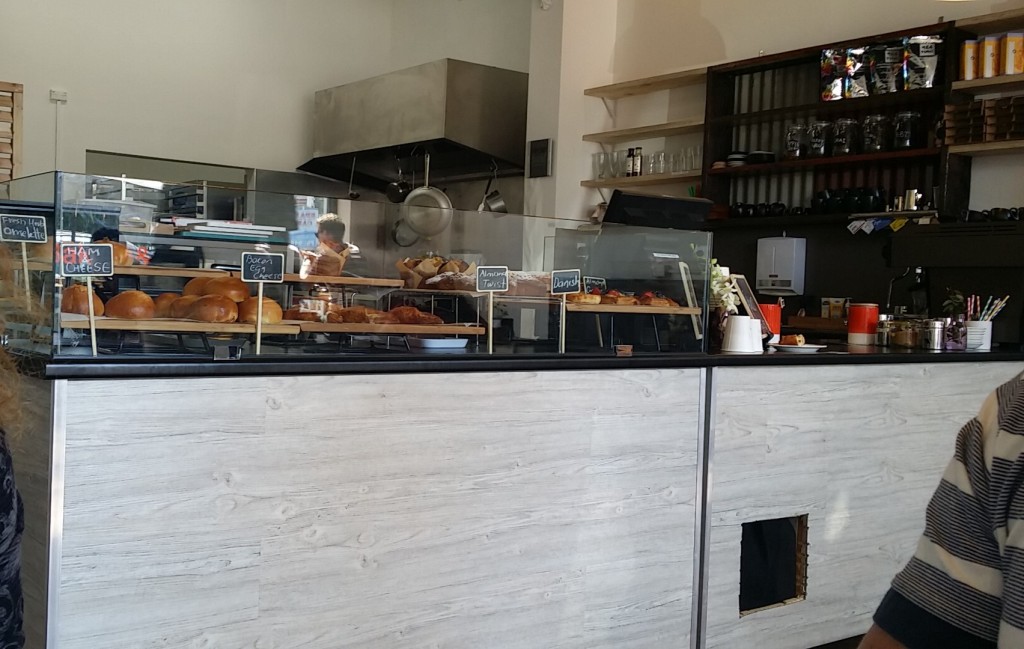 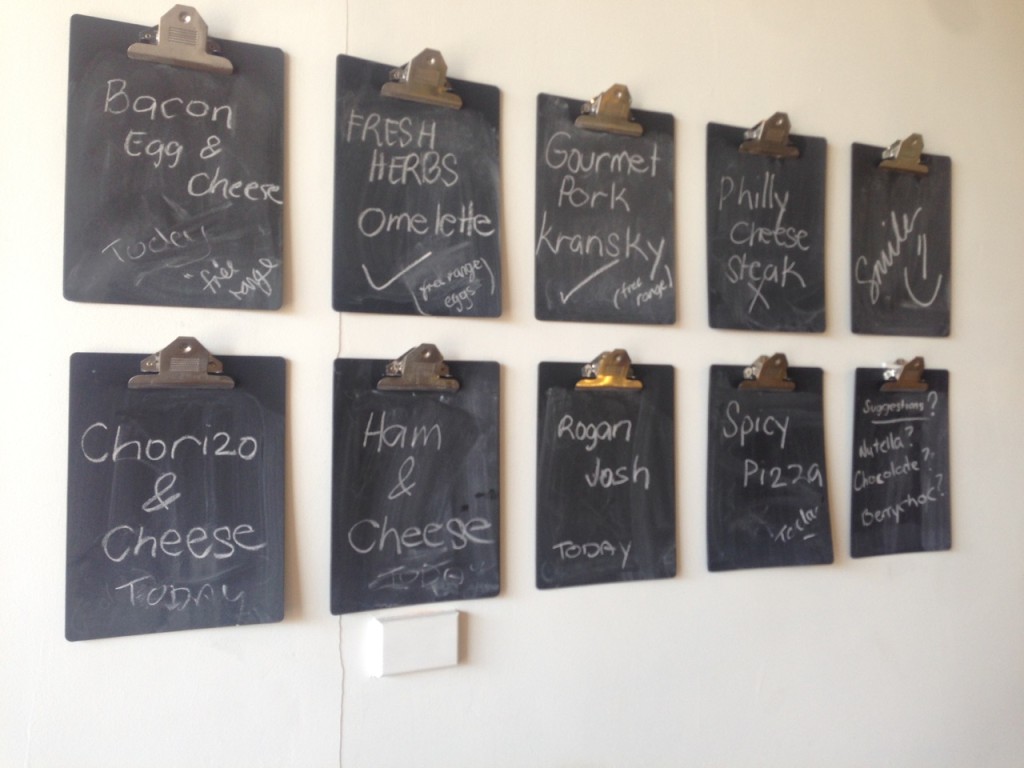 Flavours of the Day at Kolache Cravings

After living in Texas, owners Phil and Nona Wallis managed to find a rare void in what the Melbourne food scene was missing. Setting up shop in High Street Preston in January 2016, introducing kolaches to Melbourne alongside freshly baked cakes, danishes, croissants, muffins and tarts partnered with quality specialty coffee by Decoy Roasters. Paying close attention to the popular tastes and well-loved flavours preferred by Melbournians, Kolache Cravings aren’t shy to experiment with their ever-changing selection of fillings, churning out dozens of freshly baked goods from their open plan bakery throughout the day. 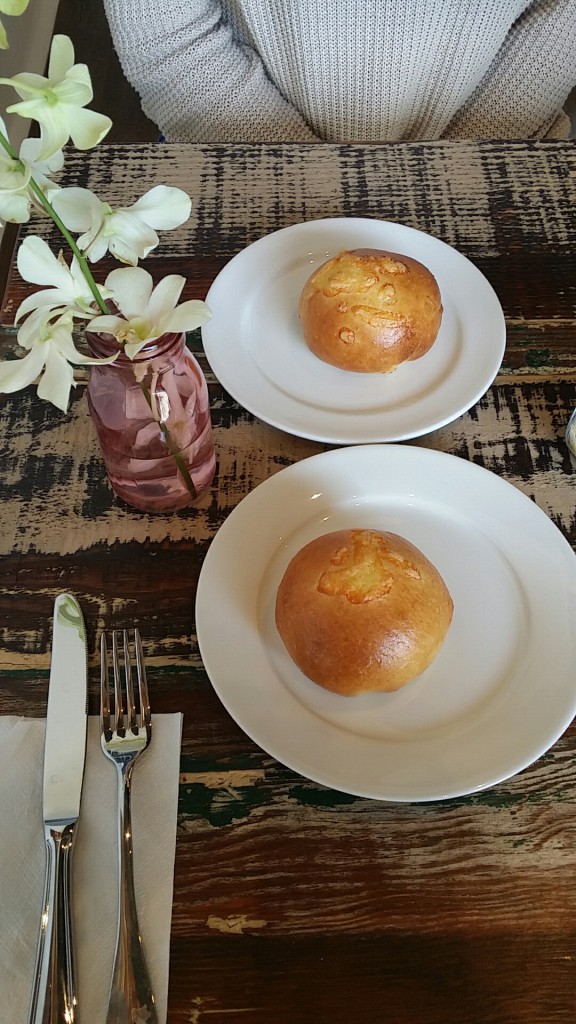 While the assortment of fillings may keep you guessing, the quality and winning recipe for the softest, freshest buns remains consistent. So whether your passing by for a chorizo and cheese or a strawberry and cream cheese kolache, I would recommend passing by to satisfy your savoury or sweet craving.

I think it’s fair to say Melbourne’s excitement for gelato has just increased at least 3 fold. I feel I can justify this because as a city we’ve recently been introduced to nitrogen gelato, we hosted the Gelato World Tour last month and this past week we finally reached the anticipated opening of Sydney gelateria, Gelato Messina which opened its doors on Thursday, 14th November.

The shop façade on Smith Street, Collingwood features a very modern, sleek and minimalistic design, with dark tinted windows and its name gilded in thin gold lines above the door, it would be easy to not notice this place if there weren’t such a long line of people stretching out from its front doors. I visited on Friday night, the day after it opened and the line wrapped down the outside of the store to the next door front, so were quick to snap up a spot in line before actually deliberating whether or not we were willing to wait in such a long line. However, it didn’t take long for us to notice the helpful implementation of crowd control that Gelato Messina had in place. That’s right, this gelato bar needed crowd control. Gelato Messina would be no stranger to long lines and eager crowds, I have heard that the enthusiastic masses that flock to their Sydney stores can almost be compared to the level of hysteria that would normally be saved for tween girls at a One Direction concert. However, their highly organised method of handling the line was great. There was one gentlemen who had the task of who working his way down the line, handing out menus and pointing out the flavour ‘specials’ of the day as well as guide the flow of traffic into the store at a reasonable time. 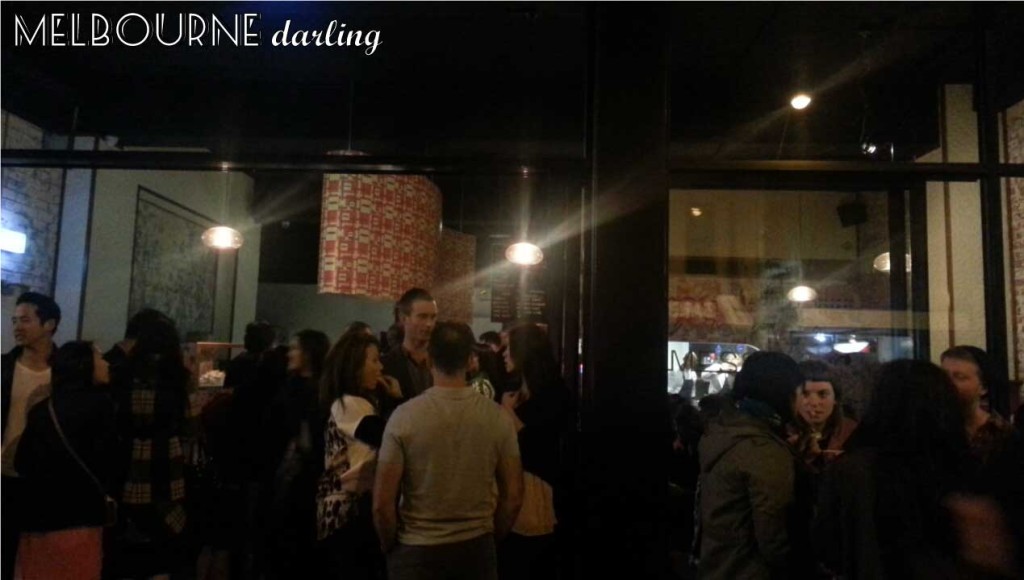 I applaud Gelato Messina for their well organised crowd control outside their store, but once I made it to the front of the line (I am going to say it took about 10 minutes maximum) I was shocked at how quickly the atmosphere turned to a manic free-for-all where waiting to be served became an entirely different story. I was directly in front of the window encasing the high pillowed mountains of gelato where behind it stood a dozen employees in cute Breton striped tops. I was patiently waiting to be served but ended up being numerously ignored as ice-cream servers gravitated towards the most pushy, forceful, demanding customers first, despite order of arrival or length of time spent patiently waiting. So, after my experience, take this lesson from me; once it’s your turn to order, speak up, smile and be quick to lock eyes with the next available server to rein in their attention like a lasso wielding cowboy before you get trampled on or pushed back by overly brazen folk. 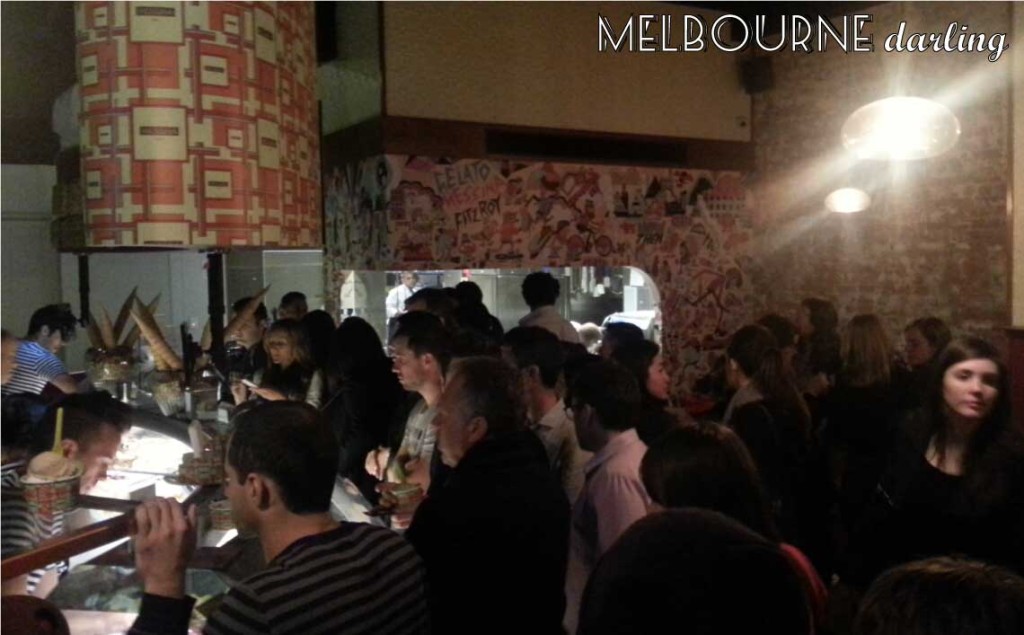 You are certainly spoiled for choice when it comes to flavours at Gelato Messina which gets another favourable tick for the number of variety and level of creativity when it comes to their flavour assortment. A full listing on the regular flavours on offer can be viewed online, as well as their top 10 flavour combinations. They also Gelato Messina won first prize in the Gelato World Tour with their ‘Cremino’ flavour – salted caramel gelato with Italian meringue, gianduia fudge, fresh meringue and crushed amaretti biscuits. Once I spotted this the Specials menu, I was sold. I also tried the ‘Pannacotta with Fig Jam and Amaretti Biscuit’ and what I learnt to be another extremely popular flavour, their ‘Gianduia Bianca’ – white chocolate & hazelnut gelato with hazelnut praline, pictured below. 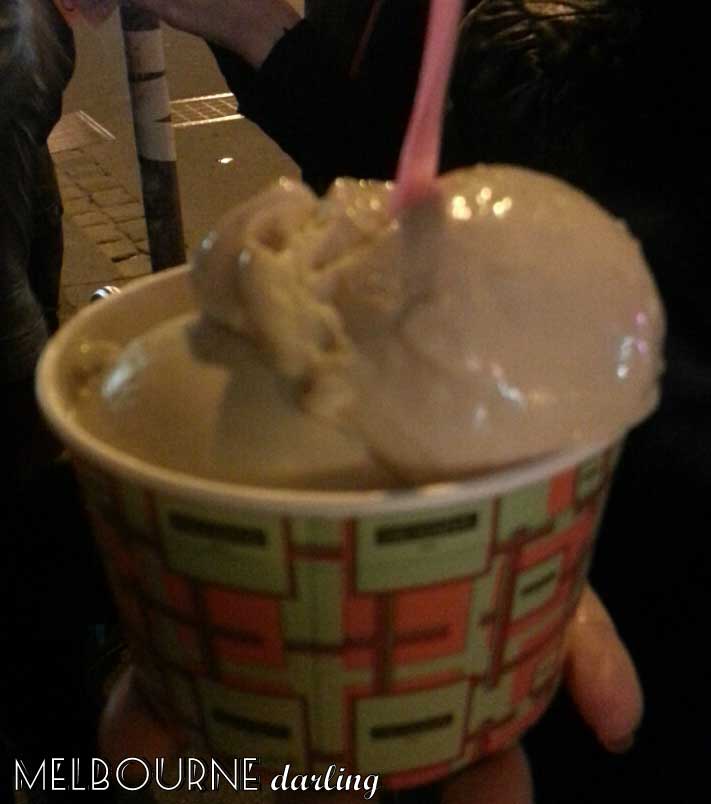 Gelato Messina were thoughtful in their approach to cater to a variety of customers and specific dietary requirements. The menu’s helpful addition of the allergy checklist ensures to state which flavours contains nuts, gluten, egg, or alcohol and in addition to their indulgent ice cream selections, the menu also feature a large selection of refreshing, dairy free sorbets. They are not shy to promote their use of high-quality, fresh ingredients and this was further promoted though the design of a glass window through to their kitchen where you can watch the gelato masters churn their confectionary creations. Also look out for their cabinet of gelato cakes. I did not get to try one but they look incredible! You can see their full range of cakes online. 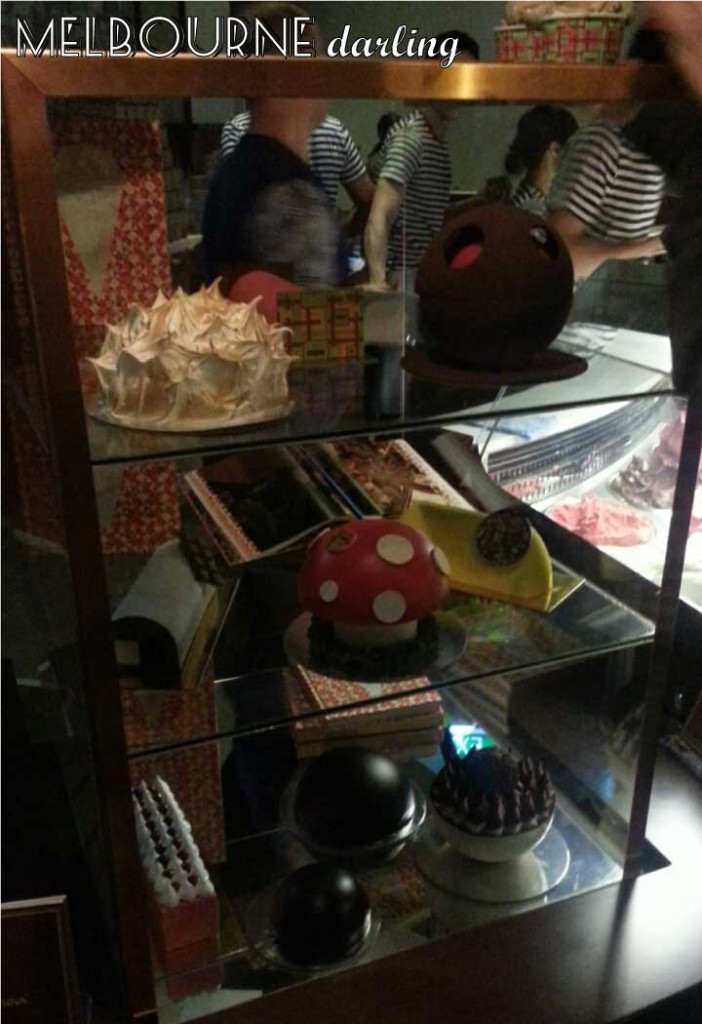 I found the prices were reasonable, but for the length of effort it took to order my gelato I was not settling for one measly scoop or limiting myself to sampling only one flavour (by that I also mean I apologise I do not remember the price of 1 scoop!) but at $6 for 2 scoops and only one cheeky dollar extra at $7 for 3 scoops, you can easily be persuaded for going all out and you won’t regret it later. What really makes the gelato so special is not only the unique and hyperventilating level of exciting flavour combinations. Although the flavours sound decadent and rich to the possible point of being overpowering, the gelato has such a surprisingly delicate texture and incredibly soft, smooth, buttery consistency, juxtaposed to the luscious explosion of taste bud frenzy it produces. They could have been a little more generous with their servings and the ultra-soft consistency caused it to melt in rapid time, resulting in all the gelato combining into one soupy flavour surprise. That being said, it was one amazing treat, Gelato Messina really does serve a superior level of quality gelato and I dare say that if you decide to make the trip here, I can guarantee you will not be disappointed.

Just as Melbourne shoppers are be celebrating the soon to be arrival of H&M, Inside Retail has reported that Japanese fast fashion and casual wear retailer Uniqlo has also confirmed the location of its  first store in Australia to be in Melbourne, more specifically, inside the ‘Melbourne Emporium‘ centre.

Melbourne Emporium is currently under development, but the location lies within the block between Melbourne Central and the Bourke Street Myer / GPO building (between Lonsdale Street and Little Bourke Street) and Uniqlo is said to be occupying a 2180sqm store within the shopping destination, spread across four floors. Uniqlo offers a wide variety of styles for men, women and children, captivating collaborations with well known designers and brands, and the most affordable knitwear collection. I attest that this is sure to be an exciting new addition to the Melbourne shopping scene!

For more details, you can read the full article here. 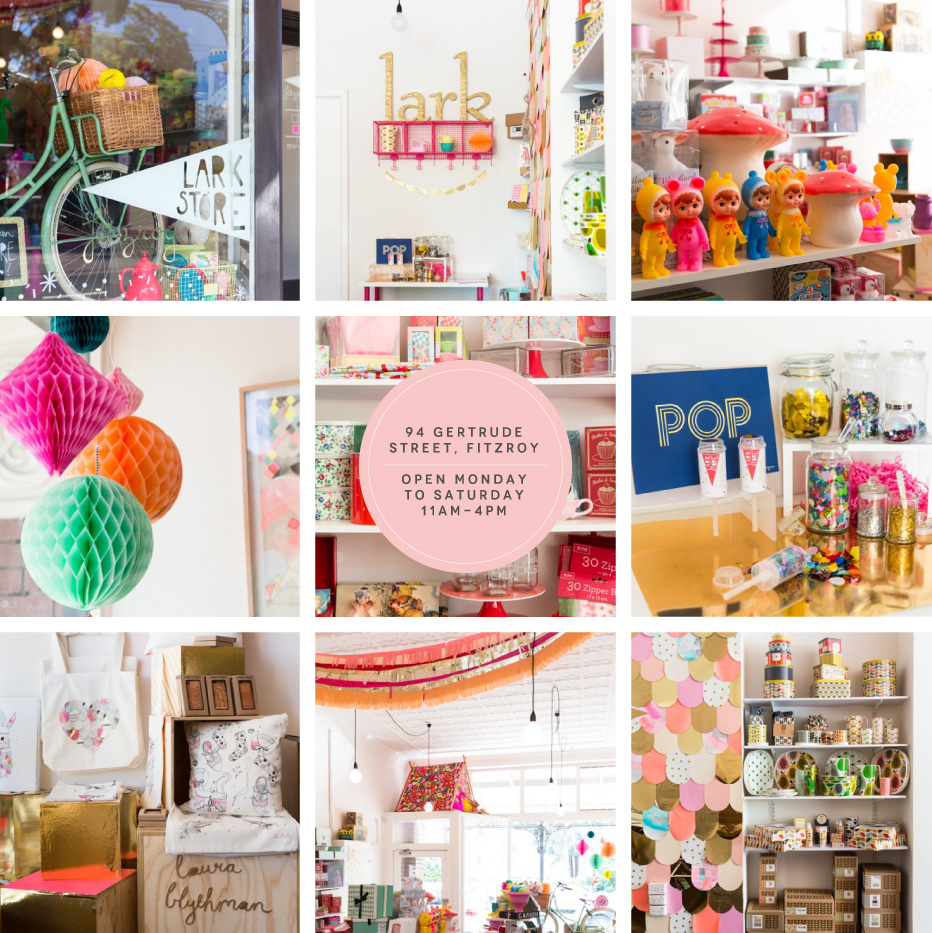 The delightful label Lark has been making kitsch cool with their well-known Daylesford store and retail website, stocking cute, quirky and crafty home wares, party goods and accessories.  Lark owner, Allison Jones certainly has a good eye for design, handpicking all of her merchandise from prominent local and international designers, stocking everyone from Love Mae to Orla Kiely. It therefore shouldn’t come as much of the surprise that the location Allison selected for a new Lark Pop-Up store is situated in the urban artistic hub of Gertrude Street, Fitzroy.

The much anticipated opening of the Lark Pop-Up store has finally arrived, with the store opening its doors for the first time today, Friday 27th September. The store is only planned to occupy its Gertrude street location for a six month period, so if you are not yet familiar with Lark’s lively collection of vintage inspired goods, now is your chance to become quickly acquainted. The Fitzroy store will stock an extensive selection of the goodies from their online store, as well as a few exciting new additions, including in-store pick up for online purchases, in-store craft events and a ‘confetti bar’ where you can customise and create your own confetti.

From the sneak peeks that Lark’s social media pages has provided it’s eager followers over the past few months, this bright, gelato coloured wonderland will have you feel like you’ve stepped into Cindy Brady’s dream birthday party and this is one pretty party you definitely don’t want to miss! 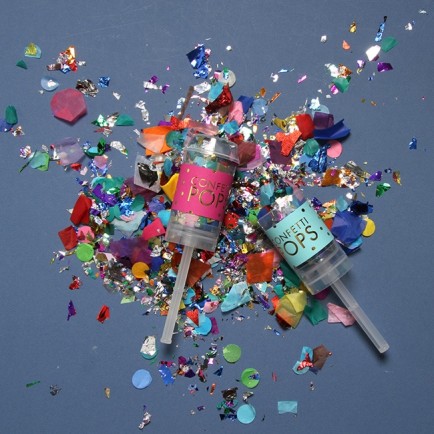 American retail giant Williams-Sonoma launched their first ever Australian residency a few months ago with the opening of Williams-Sonoma, Pottery Barn, Pottery Barn Kids and West Elm stores in Sydney. Thankfully it did not take them too long to make their way to our stylish city of Melbourne!

Originally from Brooklyn, the furniture and homewares store ‘West Elm’ opened its first Melbourne store on Thursday 21st September in Chapel Street, South Yarra. You may be familiar with West Elm, known for their eclectic mix and match collections if you happened to shop at one of their stores in New York, and luckily, you no longer need to worry about that far distance freight! The best thing about West Elm, even with just a quick browse through their website,  you will find it ever so easy to imagine incorporating their versatile and modern pieces amongst your own collection at home. Another impressive factor is the store’s attempt to deviate from their ‘American giant’ image through their creative effort to collaborate with local brands and Etsy sellers to showcase and sell locally designed homewares in store too! I personally find myself drawn to their nature-inspired twig and branch designs!

5. Martini Side Table in Antique Brass

The Docklands is an area of fairly slim pickings when it comes to the amazingly good coffee many Melbournites are now spoiled for choice with.  Thankfully, Dockland workers and residents alike no longer need to venture too far to enjoy their heavenly cup of caffeine, with Dukes Coffee unveiling their fancy new digs, Story Coffee and Foodstore.

I only had time to pop in for a takeaway latte, and the coffee was great, a little towards the milky side but fruity and smooth.  I had a quick peek at the fresh sandwiches being made on site and the sweet treats available such as brownies, baked goods and pastries, which I am keen to try on my next visit!

The venue itself is a sweet little escape from the corporate area and construction sites just a step outside this store. The café’s interior takes advantage of warm lighting and soft music that creates a very cosy and inviting ambience, so much that you may find yourself wanting to stay long after your takeaway coffee is ready! I look forward to returning. 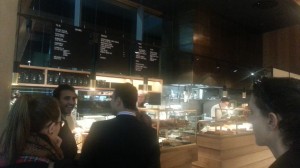 ps. Please excuse my very amateur photos at the moment as I am I am currently shopping to buy a new camera!