It’s said that there is a little piece of Paris can be found in Melbourne if you were to head to the ‘Paris end‘ of Collins Street. Well I am here to debate that claim because I just had a wander down a little Melbourne laneway off Flinders Lane that I found to be très bohème and très Parisien. Scott Alley and the laneway across from it, Manchester Lane are fine examples of the cutest little laneways you can find hidden amongst the Melbourne CBD. Manchester Lane is where you will find hip new not-for-profit cafe Shebeen (which I can’t wait to try for myself!) and Lady Petrova, a store akin to a Polly Pocket pastel wonderland filled with one of a kind designer pieces handcrafted by fashion designer and store owner extraordinaire Petrova (whom you might recognise from the 2008 season of Project Runway Australia).

Across from this store is a quaint little French crêperie lined with colourful lights and a wooden facade called Roule Galette. Upon being seated we were greeted by a French gentleman who provided us with menus and water for the table. The menu was extremely extensive for a crêpe place and there was an extensive selection of sweet and savoury options in addition to a list of extra toppings you could add to your selection as well as a specials board. I will point out that it is worth reading the entire menu as we found it quite entertaining to see some of the names and descriptions of menu items possibly a little lost in translation… For example, goat’s cheese just doesn’t have the same appeal when it is translated literally from French to ‘goat dung’  and some descriptions in attempting to come across as poetically descriptive just ended up sounding a little odd, for example;  ‘where fresh strawberry prepared by my grandma flirts with the whip cream’, ‘where vanilla ice cream meet with melted chocolate under a rain of almonds’ or ‘where hot chocolate try to come in a pouch full of whip and ice cream’. But owners of Roule Galette, if you are reading this, please do not change these adorably funny descriptions in your menu, we loved it and felt it added to the authenticity to the foreign roots of the place, as though the crêpe store was freshly plonked here in a Melbourne laneway straight from the streets of Paris. To complete the romanticised European atmosphere, we could even hear the sounds of a jazz band floating through the night air. Well played Melbourne, very well played. 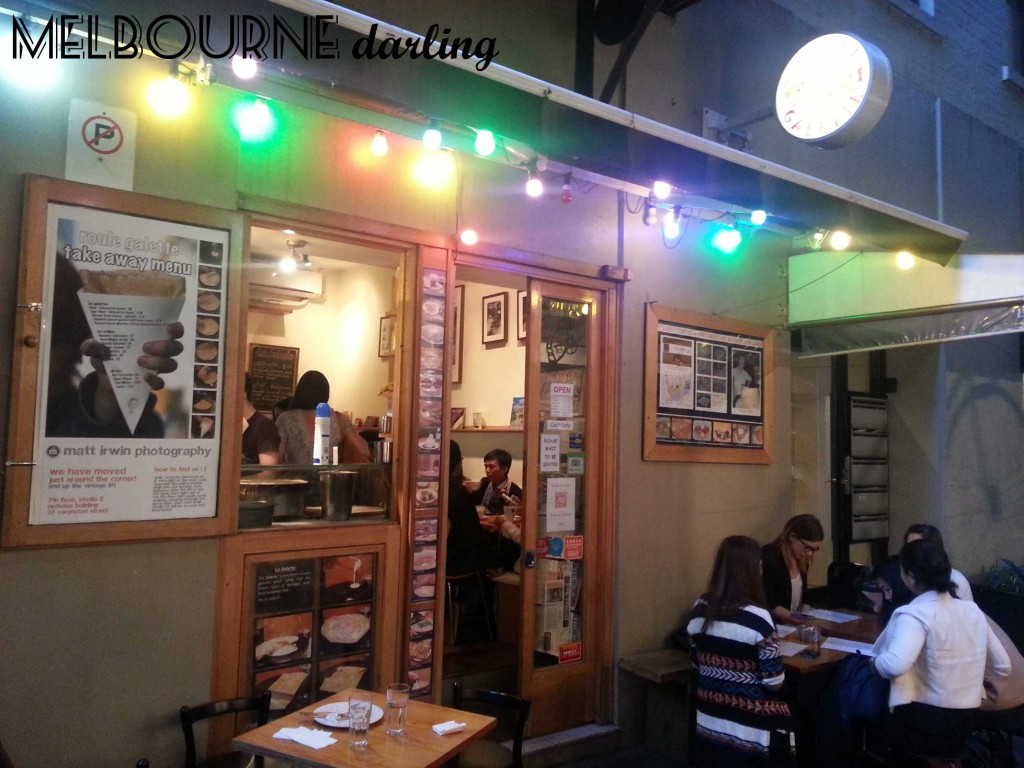 The staff we encountered at Roule Galette were entertaining and accommodating, happy to make alterations to the menu items. I ordered ‘The Piaf’ crêpe from the specials board with toppings including caramel sauce, bananas, almonds and ice cream. The waiter was friendly and jovial, serving my order but not before asking me if I knew who Piaf was and jokingly telling me I had to sing one of her songs before I could have my food (don’t worry, ears were saved that night and I was actually served my meal without having to belt out Non, je ne regrette rien). The crepe was beautifully presented and tasted delicious and decadent. The crepes were soft and with a nice, even consistency which I was thankful for after a recent visit to Breizoz French Creperie in Gertrude Street where the crepes looked fantastic but tasted what I imagined to be like eating paper thin crunchy autumn leaves through mouthfuls of air… not good.

On my visit I was dining with a large group of and staff had no problems when we had an extra few people join us later, and we didn’t feel any pressure to pay and leave right away. This is the cutest little place to wander to after dinner in the city for a scrumptious dessert. The crepes I had at Roule Galette were the closest thing I have so far found to the authentic French crêpes I encountered in France and I am so glad to now know of this sweet little spot. Collins Street can keep its ‘Paris End’; Manchester Lane and Scott Alley are my little pockets of Paris in Melbourne!