I had been particularly looking forward to dining at Hammer and Tong 412 after reading and hearing about the multitude of glowing reviews it has received from many happy diners. Some even claimed it was the best brunch they had ever had! The result of a partnership between two prominent chefs who created a partnership after working at Vue de Monde together, Hammer and Tong is located just off Brunswick Street, at the rear of 412 Brunswick Street to be precise, which is across the road from Brother Burger and the Marvellous Brew and just behind Karton, the cardboard furniture store. The main entrance and seating areas overlook Westgarth Street, so unless you know specifically where Hammer and Tong is, you would most likely miss it as if you were just strolling down Brunswick street.

Hammer and Tong 412 is open from 7am til late Tuesday to Saturday and 8am til 5pm Sunday, serving breakfast, lunch and dinner. When I arrived the café was already bustling for an early morning. You may recognise the bright, white interior which previously housed the restaurant ‘The Brix’ in a bright, very long and narrow setting where each square centimetre was used to fit in as many tables and chairs as possible (probably more of an issue for staff having to walk through the tight walkways all day than for patrons). We were seated quickly on a share table, luckily we didn’t have to move but I did feel sorry for the other party next to us that were made to do a couple of reshuffles each time the staff tried to fit a few more diners onto our share table. If I were to eat here again, I would recommend sitting by the windows if you don’t mind sitting adjacent to your fellow diners, as the bar seating that ran across on one side of the café was directly under open windows, which was lovely on a sunny day.

Our waiter provided us with menus and proceeded by immediately asking us if we would like to order coffees. Now, is it just me or do other people also get annoyed when they are asked for their coffee order as your backside barely hits the chair, let alone having been able to possibly even sneak a quick glance at the menu? I like to take a look at the beverage menu first and see what coffee blends they have on offer in addition to other drinks. Yes, I may be a caffenatic, but I can still function for two whole minutes to read the menu before I crash without a morning coffee. I was happy to find out that Hammer and Tong use Duke’s Coffee, but found it odd that they charge a small but never the less, additional charge of 50 cents to choose the single origin blend as usually there is no additional charge for this option.

Hammer and Tong feature two menus, a daytime menu and dinner menu. We were offered the daytime menu which featured some really interesting items including the ‘yabbie tail omelette’, ‘duck egg’, ‘pork belly’, ‘lamb ribs’ and their take on the ‘french toast’ all sounded like interesting choices but we couldn’t go past the Soft shell crab burger and corn & zucchini fritters, both which had a been majorly talked up by diners before me. I don’t think I have ever eaten a burger pre-noon before, but having heard the praise for this soft shell crab burger, I had to give it a go.

The food was served extremely fast, especially considering how busy the café was. I will admit that plated up, the soft shell crab burger appeared a little underwhelming, small and sloppy. I know it’s a burger, but in comparison to the delightfully presented fritters, maybe the presentation of the burger could’ve been helped with a small side or at least a skewer to help hold it upright and look a little more appealing. Luckily however, all hope was not lost as the taste test considerably saved the appeal of the coveted Soft Shell Crab burger. The crab meat was delicious and substantial and the brioche buns were extremely soft and buttery. In all, the burger featured a fantastic combination of flavours that tasted succulent and juicy. I’ve had beef and pork burgers but this is definitely the best seafood burger I have ever had (and actually a worthy competitor to my favourite beef and pork burgers also). 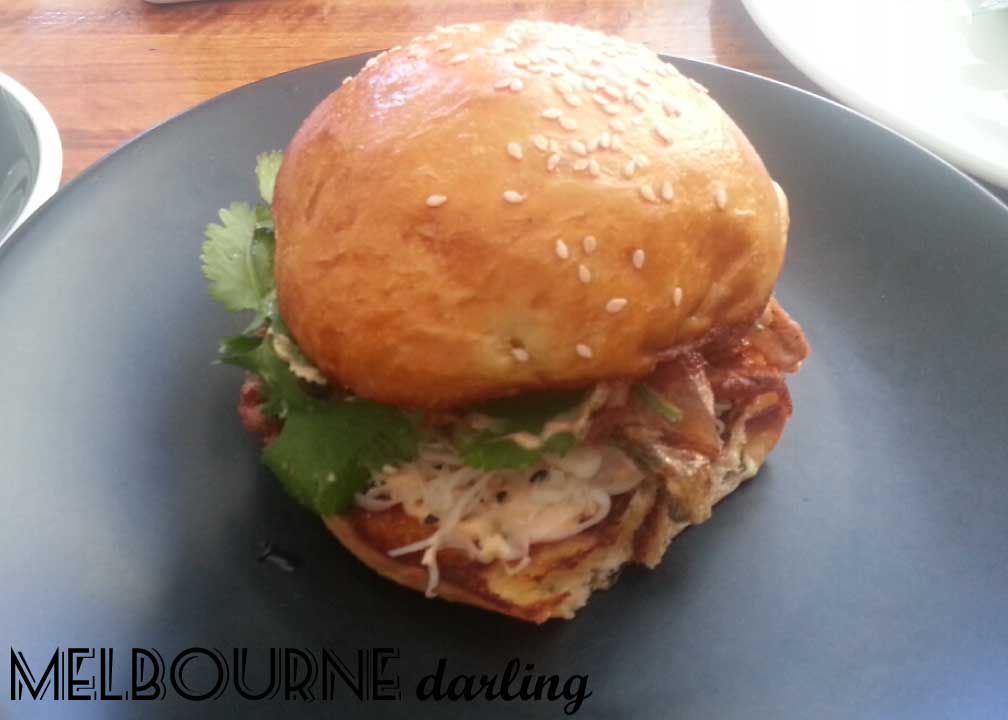 On the other hand, the fritters ended up having the opposite effect to the burger. While they was presented very well, the fritters themselves were a little bland and dry. They possibly could have done with a more corn, less zucchini ratio, as I felt the zucchini didn’t translate too well in the fritter. It just ended up tasting like a dense, bland and dry stuffing. The fried coating was also a little too thick, oily and hard for my liking. However, that being said, the dish did taste good, but I believe this all came down to the winning accompaniments of the manchego cheese, avocado and chilli tomato relish that really created that delicious pop of flavours.

Zucchini and Corn Fritters  (without egg) at Hammer and Tong 412

Prices were average for what you’d expect for the increasingly popular breed of oxymoron dining variety, what I like to refer to as the ‘fancy casual ‘ eateries, or hipster eateries if you will. Service was quick and to the point (although maybe some better planning would have prevented the case of musical chairs I spoke about earlier). The coffee was good, although not as good as Story in Docklands who also use the same, Dukes coffee. The Soft Shell Crab burger was definitely the highlight for me, but I also enjoyed the interesting ingredients that starred on the menu, the bright sun room and the buzzing atmosphere. 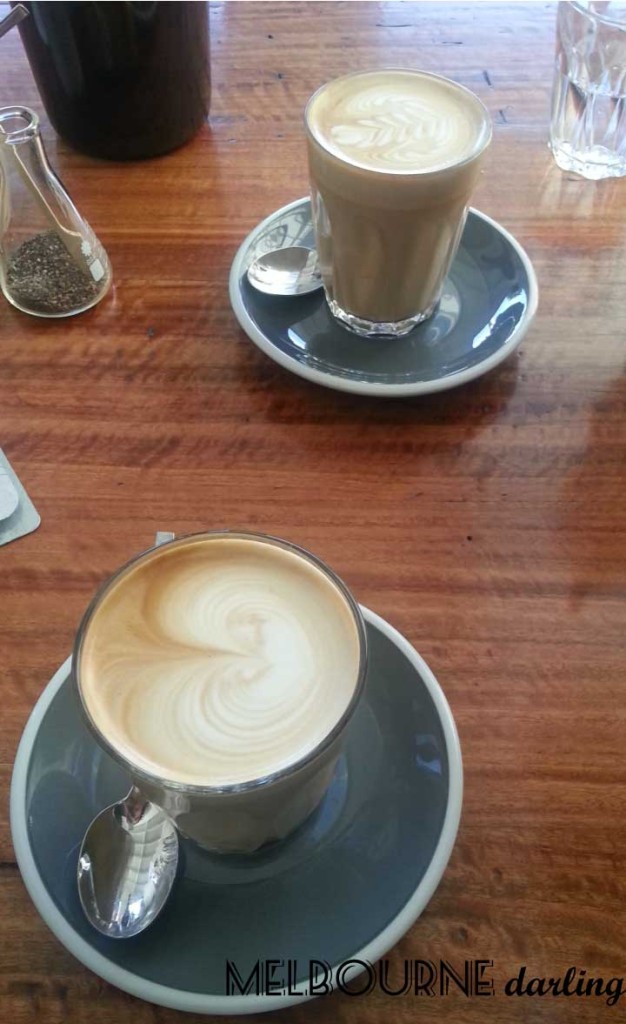 Coffee at Hammer and Tong 412